In Week 3 for our Twitter One A Days 2014 list we focused on Big Time Consulting Firms (which by the way is a big theme for Q1 here at Gadarian Digital) and ties in nicely to our recent post on 10 Reasons Why Every Consultant Needs to Blog. 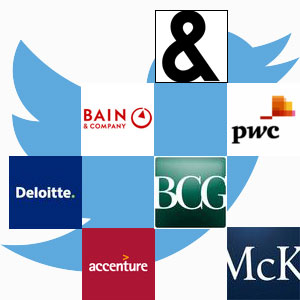 So without further ado…

And let me say right now, this is not the entire list of “big time global consulting firms” but certainly it is a pretty impressive group. Overall I have to say that I have been a bit surprised (or perhaps impressed is a better word) by the overall Tweeting velocity of these firms collectively. Many of these market leaders seem to be very active and they are all appear to be very intent on cementing their “leader” status by utilizing Twitter as a great vehicle to deliver subject matter authority across a wide array verticals key to their respective firms.

In terms of Twitter backgrounds, for the most part this group seems to be focused on a very clean look that attempts to express their desire to project control. The one exception in this regard is the Deloitte page which certainly feels a little more playful.

Also a quick observation on the list so far – the list of celebrities we picked from Week 2 surprisingly Tweet much more than the Week 1 group which was focused on well known marketers.  Also – apparently it pays dividends to follow Jerry Seinfeld – thanks for the coffee!