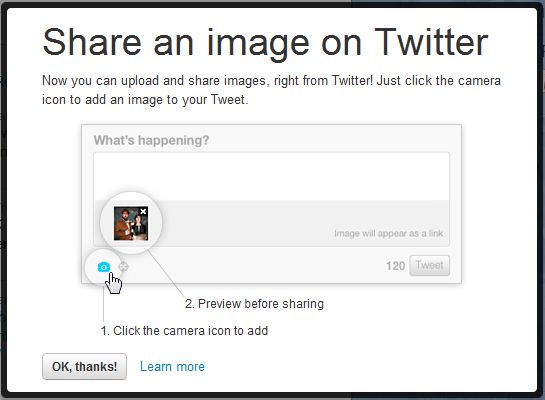 Here’s a quick review. First off you’ll notice if you try to share photo that the entire experience of sharing your photo takes place inside of Twitter rather than having to rely on the third-party. This of course is not great news for services like Twitpic.

When sharing a photo notice that in your timeline (the left-hand side) there is a picture icon used to indicate that a tweet has a photo attached to it. If you go to open up that particular tweet you will see the photo expanded on your sidebar (the right-hand side). Nothing new there as this is how Twitter has been allowing you to expand pictures (and videos) for some time now.

Lastly, I think this is probably what is going to create the most noise is, that if you pay close attention you will notice that you tweet is “powered by Photobucket.” If you take the time to click through the Photobucket link it will in fact take you to special page on Photobucket which highlights the new Twitter photo sharing experience. By signing up for Photobucket you will be able to share, store and print images – presumably yours as well as other peoples. I think that is a pretty nice feature.

I think we’ll see some really heavy usage of this feature over the coming weeks, in particular this will have some real power when combined with smart-phones. Not only will Twitter fans be able to “life tweet” in a much more real time manner, but this will also have a big impact on how people tweet about live events – newsworthy or otherwise. We’ll see if over time Twitter offers a similar capability for video tweets down the road.

Overall, I’d say job well done Twitter! Also, just a heads up that I am not entirely how quickly Twitter will be rolling out this new service.