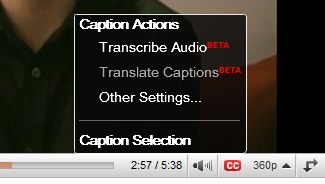 Google recently came out with automatic captioning for YouTube which has huge potential benefits for your online marketing videos.  And certainly while Google gets to play the “don’t be evil” card on this one, deservedly so as the benefits that this enhancement of YouTube’s offering to the hearing impaired are great, auto caps also play very well into the core competency of Google – that of course being search.

If Google determines something is good for search, and you’re inclined to read this article than you know that if Google is interested in something, clearly it’s something you should be paying attention to.  The auto caps programing is still relatively young, but recently on some videos a beta option has appeared allowing you the option to view captions – as you’ll find in viewing these captions, they are remarkably accurate.

The implications of this are very big – what it boils down to is Google is beginning to “read” videos and in so doing they are also positioning themselves to more accurately provide for video search.  If you utilize any video for your marketing plan this is potentially great news as it will allow your video the ability to be more likely to be “found” by Google search, and that of course will translate into more people watching your video.

While it has yet to bubble up into a primary online marketing concern, auto caps will also play into how you approach your marketing video.  Moving forward you’ll likely need to be more vigilant regarding not only what you are talking about, but also how you go about talking – key word strings will likely start to generate heat and much in the way one goes about optimizing their site based on key word text, so too might one have to concentrate on the words they say in their videos.

On the other hand if you are not utilizing video as a part of your online marketing plan, you’ve just been provided with another great reason to consider doing so – Google is listening, and if they’re listening that means they’re indexing, and if they’re indexing that means YOU are being provided another great opportunity to connect with you customers.

I also ran this article on my LA Online Marketing Examiner column.

Also, literally a day after I wrote this article YouTube took the auto captioning feature out of beta.