The folks over at the Boston WordPress Group have invited me back to run another demo on May 23, 2011. I’ve been busy at work putting together my presentation, as this time I’ll be running the demo for the Genesis Theme which is developed by Studio Press, the bulk of which I’ll be spending reviewing via the use of one of their child themes (the Corporate Child Theme). As you might recall Boston WordPress graciously had me demo Headway in March during the Theme Bake Off Part 1.

Here is a link to the MeetUp which is happening in Cambridge at the Microsoft NERD Center. If you’re in the area it should be a really good event. The other themes being demoed are PageLines (which I’ve used before for another client) and I believe Hybrid.

If you want to take a peek at my demo feel free to do so (although I will say that if you are reading this post sometime in the future I’m not sure how long it will be up there) – I’d say that I’m just about done. I’ll share my complete thought later in the week after I’ve had a chance to get some feedback but overall it’s been fun to spend some time poking around the Genesis Theme and their really smart community. 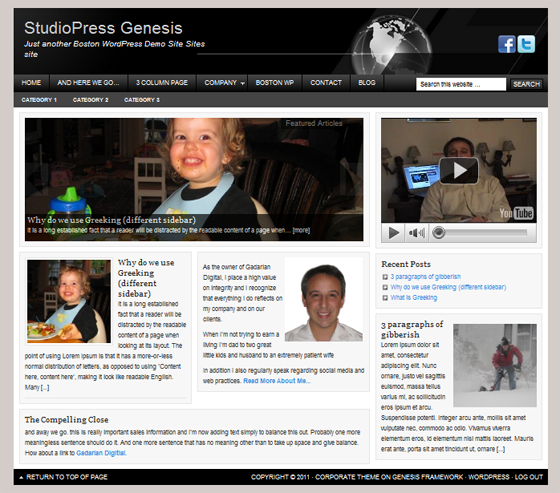 The Theme Bake Off 2.0 Genesis Demo