The 2019 Internet Trends Report was released by Bond Capital last month.  The report is led by Mary Meeker and her team, and is considered by many folks across the internet as a must read, regardless of if you are an investor or a participant in anything digital.

Internet Trends 2019 by on Scribd

In terms of a key takeaway from the report I’d like to focus on slide 9 – for the first time in human history, more than half of the world’s population are considered internet users!  (but stay tuned as this isn’t the key takeaway…) 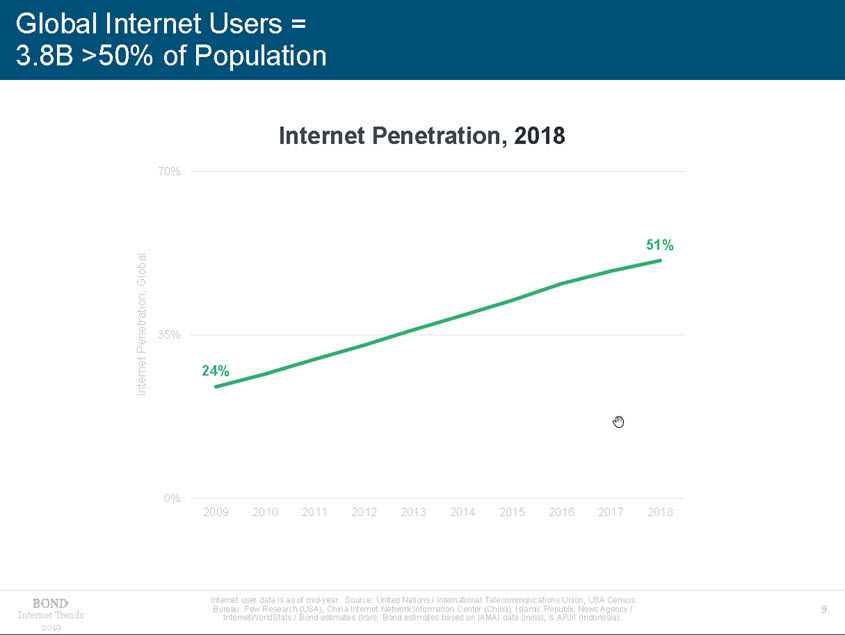 Ok – so far we’ve established that over half of the world is on the web but what I’d really like to have you focus on the reality that the purchase power of the first half is much greater than that of the second half.  So that means we’re likely as a place where we are all competing in a game that is not likely to continue to grow and so we’ll all have to compete much harder to win.  For a marketer, and for that matter any business, this is very significant as we’re likely getting near the limits of how long that long tail will really grow.

Which bring us to what I think is the most significant insight from the 2019 Internet Trends Report: (slide 29): 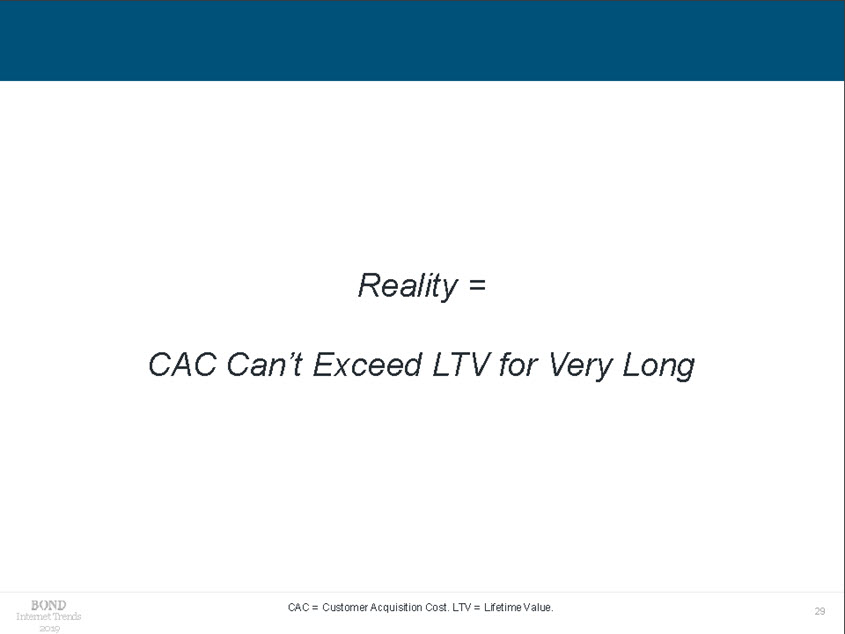 Okay – now we’re talking marketing language!  So when you put together a finite market (over half of the world is now on the internet, and we’re all going to assume that yes, this half has considerably more capital resource as compared to the now less than half of the world’s population currently not on internet) along with a reality that at a certain point we’re subject to the general rules of business (meaning we either have to pay our bills or get financing to float our bills) I have a strong suspicion that we’re about to see many more shakeouts across many industries.  Some high fliers are about to get their wings clipped and many new entrants that have a good grasp of both data and a true understanding of their markets will find new runway, often at the expense of fast moving entrants that simply run out of steam.

We are getting to the limits of “the internet” in terms of users.

It will continue to get more expensive to “capture” these users because they are becoming a finite number (3.8 billion).

Businesses will have increasing pressure to prove out value (and profit).

As we go a bit further into to report, I think there will be some good opportunity for retailers to thrive but certainly they’ll be expected to continue to pivot more into digital but also to pick and choose how best to play to on-premise strengths.  Amazon Vs. Walmart is probably the best example of this where Walmart is quickly looking to compete online while Amazon seems to be building an impressive war chest of on-premise (think WholeFoods) and deliver assets.  On this front, I do have an additional observation… many of the largest ad agencies in the world rely on a robust retail industry so I suspect that when it comes to data we’ll see a strong integration between what is known about on-premise (boots in the store) and additional digital customer behavior (data) so expect to see some real movement here.

Cloud is real.  And so if Freemium.

Data is a big one.  The gap between those that understand data and those that don’t will continue to grow, and this is where we’re going to find many of the winners.  Note the earlier reference to retail as a way that this will play out pretty forcefully.  No matter how you slice it, marketers will continue to have an increasing role around that evolution and utilization of data.

This one is near to my heart… Have we hit peak TV? 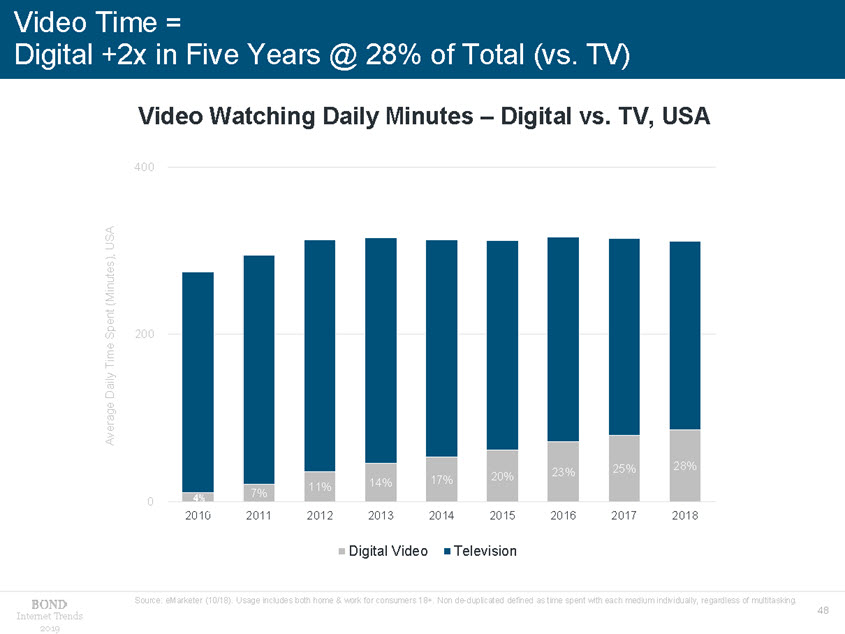 The last piece I’d like to highlight is something not in the current report… but Mary Meeker and team, if you are reading, this is where I think you need to concentrate some fresh energy for the 2020+ versions, and that is around things and how things will connect the marketplace.  5G is coming, and this will empower IoT.  As a result as you start to weave together Cloud, Big Data, and even concepts like “short form video” (what does video look like from the perspective of a thing?) this feels like the beginning of what’s next.