I saw a very interesting thing tonight on Twitter – it appears that for select accounts they are now offering the ability to add further branding in the form of a banner spot on your page. So far the only page I’ve seen this for is on GE’s Twitter Page, and while I obviously have no idea how long this will be in effect, for now it is live, but also here is a screen grab 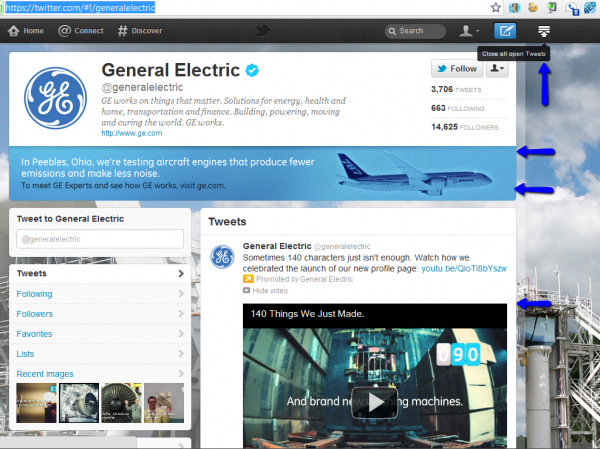 It will be interesting to see if Twitter rolls this feature out to all users, but for now my guess is it will be limited to paid advertisers only.

The even bigger question of course is will Twitter roll this feature out site wide but use this space much as other sites currently do in the form of traditional banner advertising.

It’s been a while since I did a post like this, so I’ve taken the liberty of also pointing out another feature I saw on GE’s page (not on mine though) which was the ability to “close all tweets”. The implication is that Twitter has taken the liberty of “opening” all the tweets on this page. Twitter purists will likely be upset by this kind of development, but for me, I have been a big fan of the way Twitter has opened up the way their services operates by integrating both pictures and videos.

So while I started out talking about GE’s page, it turns out this is something of a year end post. Anyone care to offer up their own predictions for what 2012 will bring to Twitter feel free to comment below.