12 Digital Tactics That Republicans Are Using for the 2012 Election

12 Digital Tactics That Republicans Are Using for the 2012 Election 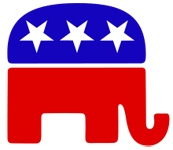 With the 2012 Presidential election around the corner the noise is getting extremely loud. In particular it feels like a very good time to take a look at how the politics are evolving and to see how the parties are using digital media to “affect” voters.

With that in mind here are 12 Digital Tactics that Republicans are Using to help influence voters and spread their message (also – don’t forget to check out our list of Democrat Digital Strategies either ).

1. Using Suspense to Build Up Anticipation.

In particular the Romney campaign has done a great job of in this regard with their VP pick. If you’ve been following this story online than you know that by taking their time they’ve given this particular issue plenty of time to gestate. When is the right time to announce. The process of vetting. Who is on the short list. Romney is going to announce early. Romney will announce before his international trip. The short list is even shorter. Finally… the actual announcement. Each turn provided the Romney campaign a very nice digital return.

Ready to meet Mitt’s VP pick? Head over to this page – http://www.mittromney.com/forms/meet-mitts-choice-vp – those of you in digital marketing will appreciate this. Those of you not should learn from it. 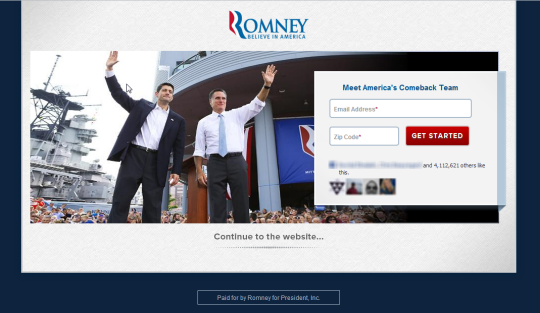 Very well done! That’s right. They want to send you emails. Also very similar to an approach that Obama’s team used.  Digital marketers always talk about the value of the list.  Clearly presidential politics understands this all too well.

This is an area that Republicans have really done a good job with. Moving beyond the Drudge Report, the “base” has mobilized online and created a very well healed digital blogging infrastructure. This in turn has become something of an unofficial communication channel where these same bloggers than share ideology across their sites and social networks.

5. Narrative – Define the Candidate or the Web Will Do it for You.

This is one area that I think Team Romney needs to come way up in – so far they have not focused as much on their candidate and instead have elected to be more focused on the record of President Obama. That is not to say the issues are not there as they clearly are addressed on Romney’s site on this page called Issues but it seems the pointed lack of focusing on how Romney wants to address the issues and instead trying to direct energy squarely on Obama has been the biggest way to define Romney so far.

Romney stands for something different than the President. We are all getting a very clear sense of how the campaign is looking to define the president, but again this is an area that the Republicans are not as united on.

The Tea Party seems to have a very clear position – you can actually read it on the about page of their site, but it still remains to be seen where Romney will actually land on many issues provided he assumes the office of the President. Again – that is I suspect a somewhat purposeful strategy as he can continue to try to be “many things to many.” Online the result though is that at times it does seem like the candidates agenda is being defined due to the information vacuum.

One area that has proven to be a great strategy is continually claiming the mainstream media hates Republicans.  This strategy has does particularly well within the digital world and more recently an off shoot of this strategy has been focused on aggregating celebrity opinions that are decidedly anti-Republican such as this recent post on USA Today.  The real action starts to unfold in the comments.

Talk about a link bait double whammy – “They hate us” plus “celebrities” the only thing possibly lacking is including bathing suit shots of all these celebrities which might actually be so heavily trafficked that the entire internet itself might actually break!

Yeah.  Social media is a very big deal.  And unlike in the 2008 election, Republicans have caught on and following in the wake of the Queen Mama Grizzly herself, this Republican ticket is very active in social media.

YouTube – 14K+ subscribers BUT over 17,000,000 video views – another really nice example of how far social media can travel!

Spotify – This seems like a little bit  misstep on their part but the songlist seems to agree with me for whatever that is worth!

Spend baby spend!  Citizens United v. Federal Election Commission eventually was heard by the Supreme Court. The result is we are now seeing this massive influx of advertising dollars by parties outside of either candidates direct control. The Republicans have seen massive advantage in this type of spending. The result is another wave of advertising, so much of which is then entering the digital landscape either in the form of direct spend or by being propelled into the “conversation cyclone”.

Seems like virtually every story, no matter what the topic quickly devolves into a political savaging. This has almost become a blood sport. I’m not sure this actually advances anything but so many of the comments seem to tightly follow the news cycle.  In fact it is nearly impossible to visit any corner of the web at this time and not hear about how Obama is or already has ruined the country. 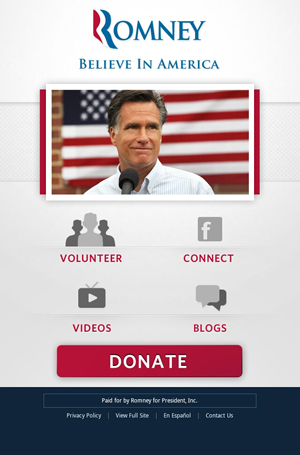 The Romney site is very well done. It inspires confidence, and if feels both candidate worthy and presidential. If you are looking for ideas for an upcoming site build you can certainly learn a few things from this site. The colors are on point, and the use of images are presented very well.

And it is impossible to not notice the very heavy emphasis on being able to connect with the candidate either through email or by social media.

Notice how they effectively use copy as well – a good amount of home page copy dedicated to the “middle” – those sacred voters that both parties are now racing towards with all their might while still trying to “galvanize” their respective bases.

There is also a well done mobile site: http://m.mittromney.com/.

Also be sure to check out this other official website – ObamaIsntWorking.com – clearly another big bet on going negative. Also for bonus points notice the nice landing page inside this site meant to capture your email address.

One thing that really seemed to define Obama and to some extent, in particular to provide him with the real feeling of being a winner was the amazing job that they were able to do with artwork.  The big “O” logo was really fantastic – it felt relevant, powerful and today.  The now famous Shepard Fairey poster took it to a whole new level.

Right now it is still early days so we’ll see.  Perhaps the Republicans will be able to inspire a crew of artists to take on the cause and create some amazing artwork to counter what promises to be an impressive display by Team Obama.  For now though this feels like a very strong start.

In the hyper fast world of today, Twitter has a huge impact in how ideas are spread – https://twitter.com/#!/search/?q=%40mittromney&src=typd.

Take a look at this Tweet and you’ll notice the Romney campaign is even using a customized URL shortener (Mi.tt)

Truthfully, all pretty amazing stuff!  Feel free to comment below and stay tuned for the upcoming post on sharing some of the digital tactics that are currently being used by the Democrats.